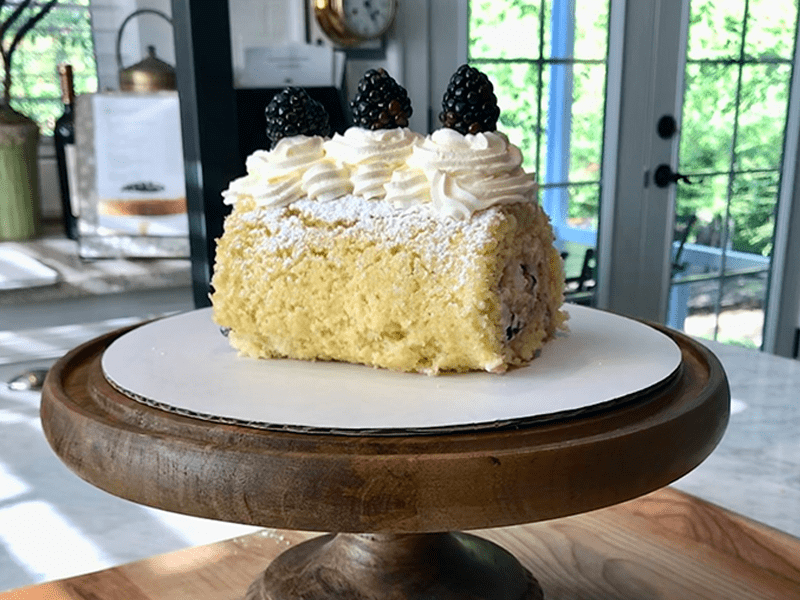 I have become enamored with the British Baking Show Series. The first series to show on Netflix is actually the 5th series of The Great British Bake-off in the UK that aired in August 2014. This difference has caused a lot of confusion for people following the show in the US and Canada.

I have watched the episodes many times and finally decided it was time to try my hand at baking. What better way than to follow the series bakes. I am starting with the 1st series on Netflix.

The signature bake for this episode was a Swiss roll. Even though it has the title of Swiss, it is generally believed to have originated in Austria. From what I can gather the important thing is to get a soft sponge with an amount of filling that is the same thickness as your sponge. The filling shouldn’t be too thin or it will seep into the sponge and make it soggy.

I’m always amazed at the flavor choices of bakers. I love the way Chetna Makan brings her heritage into her bakes which make very different flavor combinations. Chetna made a Cardamum, Pistachio & Coffee Swiss Roll in this episode. Mary Berry commented that the cardamom came through right at the end and liked her swiss roll.

Martha Collison made a Tiramisu Swiss Roll with Macadamia nut brittle. I thought the decoration on her bake was very nice. Swiss rolls do not traditionally have any decoration on top, but I think the bare top just cries out for a pretty topping.

When making a swiss roll it is important not to cook the sponge for too long. If you bake it too long it will make the sponge dry and it will crack. Many of the bakers rolled their sponge when it was still warm out of the oven. I plan to try this method.

I decided to make a Blackberry, Lemon Swiss Roll. Blackberries used to grow wild in my backyard in Edmonds, Washington here in the US. I think blackberries actually have a subtle, sweet flavor and I believe that the tart lemon will bring out the sweetness in the blackberry a little more.

I have a long way to go to learn even a fraction of what the bakers on this show have learned. But I am having a great time. I would love to hear about your version of this classic bake.